Pingan (Ping An) health insurance for foreigners in China

Pingan is considered one of the most popular local insurance providers in China among expats and foreigners. Established in 1988 in Shenzhen, Pingan Health division however is headquartered in Shanghai. They supply market with various options but not limited to as below:

As for medical plans that are available to foreigners, there are only 2 sets of those with certain tailoring allowed. Access series will be valid only in public (government run) medical facilities such as Peking Union Hospital or China Japan Friendship Hospitals in Beijing or for example Huashan or Ruin Hospitals in Shanghai. Below is an overview of Access series of plans, Executive series has slightly higher limits on each benefit plus will be valid in most private and internationals hospitals throughout China. 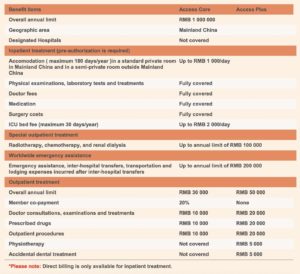 Much lower limits compared to international health insurance providers but so is the price of Pingan Insurance Plans in China. One comes as a result of another one. Get in touch with us if you are interested to learn more about their plans and how they are compared to other popular options on the market these days for expats.