That will primarily depend on what medical facility you decide to go to. To remind our readers again, there are generally 2 types of medical facilities in China: government run hospitals (public medical care) as well as international type private clinics and hospitals which are quite often foreign funded too and have several partnerships with overseas hospitals.

Is medical expensive in China?

Lets start our analysis with public medical facilities. Best of those are referred to as Grade 3 hospitals. Social insurance will cover expenses in those. Quite a few of those typically also have VIP or International department (social insurance in China won’t be covering expenses in this case though). Most well-know this type of hospitals are Ruijin Hospital上海市瑞金医院 and Huashan Hospital上海华山医院 in Shanghai as well as Beijing Union Hospital 北京协和医院 and China-Japan Friendship Hospital中日友好医院 in Beijing.

Below is executive summary for getting health treatment in public government run hospitals in China. 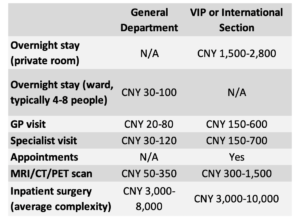 If you are looking for giving birth in public hospitals costs do typically range somewhere between CNY 3,000-8,000 in general section and CNY 10,000-35,000 in a VIP section. Tier 1-2 cities tend to have larger costs compared to smaller cities.

How much do health procedures cost in private hospitals in China?

Similarly to public government run Tier 3 hospitals, this larger depends on city where you live and what kind of medical facility you go to. Cities like Beijing and Shanghai have higher medical bills for patient for similar treatments that were obtained in Tier 2-3 cities. For example a well known chain of private clinics such as Parkway Health will easily charge you around RMB 1,500 for a general family doctor consultation in Shanghai. But drive 100km over to Suzhou and visit Parkway Health in Suzhou, costs will already be around 10-30% less. Refer to our article on what private hospitals in China for expats there are to learn more.

While we did cover costs of giving birth in China in our article here, lets analyze how much RMB will it run for you for regular treatments as well as dental procedures from several well known international clinics and hospitals. Generally speaking, foreigners and expats in China shall expect to spend around RMB 600-1,000 for a regular consultation with family doctor in those while specialists will be more within RMB 800-1,500 range, including things such as physiological and occupational therapies. Overnight stays typically require RMB 3,000-4,500 of costs per night while inpatient surgeries can greatly vary between RMB 5,000 and RMB 150,000 per incident, all depending on complexity of medical condition. Let’s dig into cost estimations that are provided directly by hospitals and that are usually quite accurate. NOTE: quite often hospitals can preferential rates with several insurance companies and you might be seeing bills with less zeros if you have insurance that supports direct billing services.

Some of the most popular international hospitals in Beijing are United Family – often referred to as BJU, followed by OASIS International. Below are costs estimations published by BJU for regular health procedures. 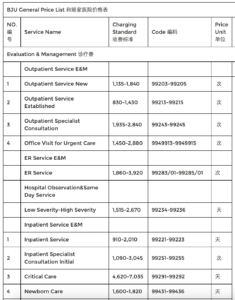 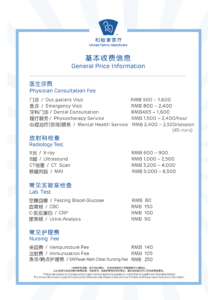 Give or take but places like OASIS or Vista clinic in Beijing, Parkway in Shanghai will roughly be in the same price range. There is however a number of medical facilities that will run you in even lower bills than Shanghai United Family. Examples would be Hong Kong Medical Center in capital and Jiahui or Sino-United in Shanghai. Below is for reference on average costs structure in Jiahui Health. 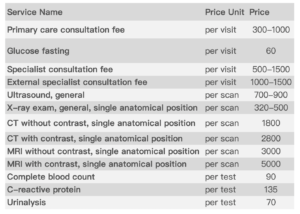 As you see costs to see a doctor in China in private facilities can vary largely too. Always make surveyor health insurance covers medical facility you are about to go to, preferably even with direct billing services so you can avoid hassle of claims bills for reimbursement. Get in touch with us to know more about options available for you & your family and what can suit your situation best.

Is Healthcare Free in China for Expats?